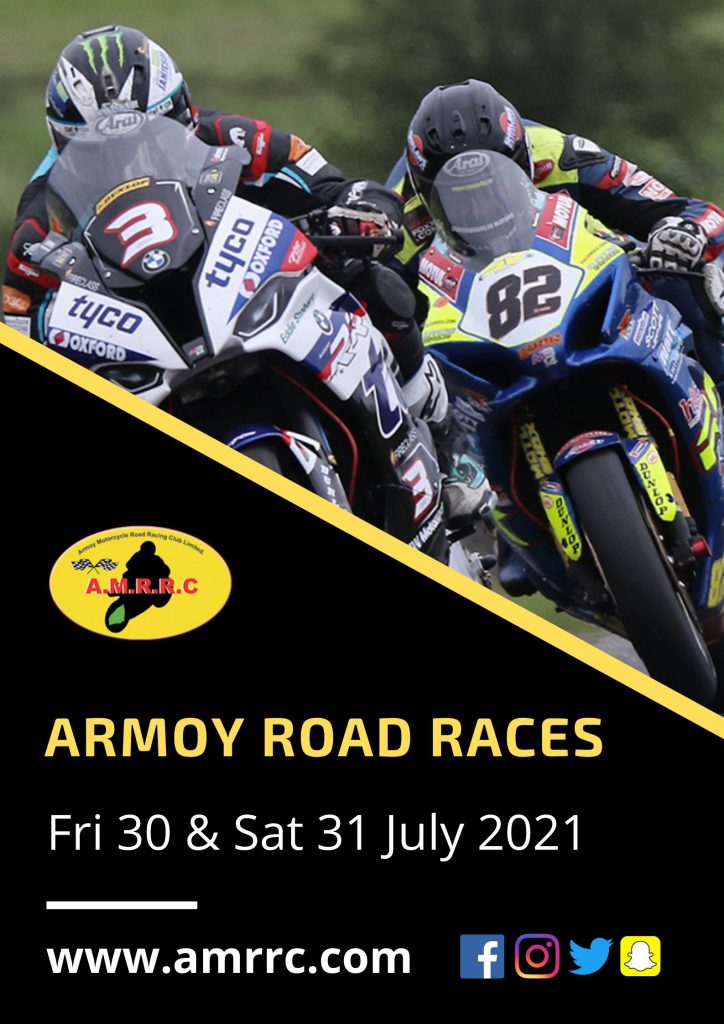 This is one of Shebang’s favourite Road Races of the Irish Superbike Calendar & probably the only Northern Irish Road Race to take place in 2021 – So it’s a must see if you are in our “wee country”!
Armoy And Its History

Armoy (from the Irish: Oirthear Maí meaning “the east plain”) is a small village in County Antrim Northern Ireland. It is 6 miles from Ballycastle and 9 miles from Ballymoney and nestles under the shadow of Knocklayd mountain. It is on the River Bush and lies within the Causeway Coast and Glens Borough Council area. The village is situated between two of the nine Glens of Antrim, Glenshesk and Glentaisie. Glenshesk is part of the Armoy Race Circuit.

There are the remains of the “Round Tower” which stands in the grounds of St. Patrick’s Parish Church. (Church Bends). The tower is about 11 m high and has three storeys. An early monastery was once founded about AD 460 by Saint Olcán, a disciple of Saint Patrick. At a time, Armoy was the main religious settlement in the Irish part of the kingdom of Dál Riata.

The “ Golden Plough” Limepark; No less than nine times in the last 50-odd years has Northern Ireland won the World Ploughing Championships, despite being the smallest region taking part.

A picturesque Presbyterian Church sits on the edge of the village. The church’s striking spire, with a Viking ship weathervane on top, has been described as ’a miniature replica of the Eiffel Tower’

How did the Armoy Club begin; Race idea to celebrate ‘Armoy Armada’?

Road racing and the Armoy Armada was a regular topic of conversation in the Armoy pub and it was on one such night in what started off as a bit of craic and a £20 bet, that Kathleen Hartin was sparked into the idea of a tribute race to the Legends of Road Racing.Kindled up, she contacted Mervyn White (Clerk of the Course at NW200) initially for his advice on the aspects of running a road race.
‘You need to form a club’ and see what interest there is, you need to become affiliated to the MCUI, You’ll need to see if you can get a road closing order, you’ll need the support of the local council, you’ll need money!Forming a club; the minimum officials are Chairman, Secretary and Treasurer. Kathleen was on a mission, she approached Bill Kennedy (brother of Big Frank Kennedy) who had been Ballymoney mayor with the idea and position of Chairman, convinced a scots man to take on the Treasurers role and had a couple of ideas for the secretary position. An initial gathering was held in Tilly Molloys hall on September 2007 to see if there was any interest. There was.52 people signed up as members with Bill appointed as Chairman. The club name was agreed and the Armoy Motorcycle Road Racing Club (AMRRC) was formed.
In 2017 there was almost 450 members.All the affiliations, constitutions, rules, agencies, roads departments and councils eventually succumbed to the objectives of the club and when finance was secured through local sponsorship and funding, the first ever Armoy Road Race – Race of Legends was run in July 2009.
Visiting Northern Ireland – then see where is best to go www.discovernorthernireland.com
PrevPreviousAlgarve Raft Race – Sunday 26th September 2021
NextRevive to SurviveNext